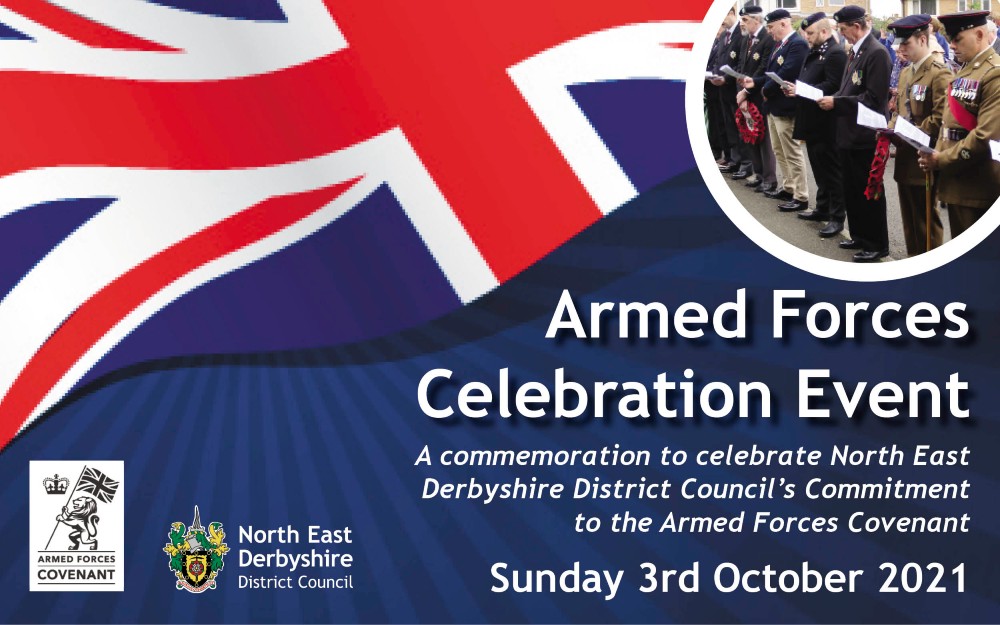 Join us for a day of celebration and commemoration as North East Derbyshire District Council pays tribute to our Armed Forces on October 3rd 2021.

Highlights will include the chance to chat to different areas of the Armed Forces, who will be sharing information on their speciality or support services.

There will also be military and emergency vehicles present, a Highland Piper; Armed Forces stalls, community stalls, refreshment stalls and FREE activities for children, including face-painting and Laser Tag by Extreme Wheels (for ages 9 and above and subject to weather conditions).

As part of the commemoration, a church service will be held at St John the Baptist Parish Church, Church Street, Dronfield, S18 1QB from 1.30pm-2.30pm.

The service will recognise that in the defence of the realm, our Armed Forces sacrifice some civilian freedoms, face danger and risk suffering serious injury or death as a result of their duty.

Families also play a vital role in supporting the operational effectiveness of our Armed Forces. In return, the whole nation has a moral obligation to the members of the Naval Service, the Army and the Royal Air Force, together with their families, who deserve our respect, support, and fair treatment.

Everyone is welcome to attend the service to commemorate and pay tribute to our Armed Forces Community who have worked tirelessly to defend our realm.

Cllr Martin Thacker MBE, Council Chairman and Armed Forces Champion, said: “For the last 18 months, we have been unable to hold any of the planned commemorations of the Armed Forces anniversaries, so this event will be a real opportunity for people in the district to come together and honour those in the Armed Forces, both past and present.

“It will show the Council’s ongoing commitment to the Armed Forces Covenant and will be a chance for people of all ages to get together and enjoy the day.”

Please note: The event is subject to any Government COVID-19 guidance in place at the time. Keep a look out on the Council’s social media channels for any updates.