On 29 January 2020, Edward Leddy Owen who works for both Bolsover and North East Derbyshire District Council’s picked up a ‘Heat Heroes’ award at the Houses of Parliament for his fantastic work helping residents in Derbyshire.

The Heat Heroes Award Scheme is run by fuel poverty charity National Energy Action and supported by four Gas Distribution Networks – Cadent, Wales and West Utilities, Northern Gas Networks and celebrates the efforts the Heat Heroes have gone to in helping people who live in fuel poverty. The exceptional work Edward participated in across the Derbyshire districts was recognised at the prestigious event at the Houses of Parliament, where Edward was thanked for his efforts in making life changing improvements to residents in Bolsover and North East Derbyshire Districts.

Edward, the Home Improvement Co-ordinator at both authorities, has been working with local residents in conjunction with the Derbyshire County Council Healthy Homes team to improve the quality of life of residents, by providing new heating systems for their homes.

He facilitated many new installations at resident’s homes, turning them from energy inefficient properties to being cost and energy saving premises, where the occupants could move away from living in fuel poverty. The work was undertaken with Cadent Gas, who deliver the fuel to homes and businesses through underground pipes. This network can deliver four times as much energy as electricity networks at peak times.

Councillor Charlotte Cupit, Cabinet Member for the Environment at North East Derbyshire District Council said: “We are extremely proud of the work Edward has undertaken, helping some of the most vulnerable members of our society stay warm at home by making life changing improvements for them, work which he does on a daily basis and this award is a fitting tribute for him to be nationally recognised as a heat hero.

Councillor Deborah Watson, Cabinet Member for Environmental Health at Bolsover District Council said, “Edward truly is a hero for the sterling work he carries out. We could not be more proud of his invaluable achievements. He has, and continues to, help struggling residents to keep their homes warm, which improves their quality of life and overall wellbeing.” 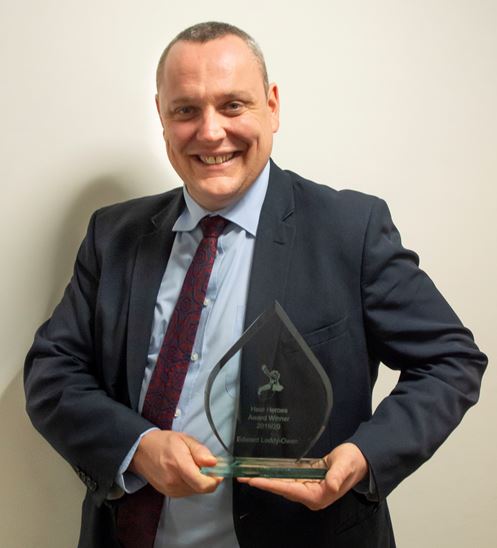