The LDS defines the documents that will form the North East Derbyshire Local Plan and sets out a timetable for their production, including the key stages when local communities have the opportunity to get involved.

The Council is required (by Section 15 of the Planning & Compulsory Purchase Act 2004, (as amended by the Localism Act 2011)) to prepare and maintain a Local Development Scheme (LDS). It must also publish up-to-date information showing the state of the authority's compliance (or non-compliance) with the timetable.

The Local Plan was submitted for examination in May 2018 in line with the adopted timetable, with hearing sessions expected to commence in September 2018.  The dates for the hearing sessions are now set to commence in November 2018 and it will not be possible to indicate a timescale for the publication of the Inspector’s Report or plan Adoption until the hearings have been closed.

An update of the current timetable position in relation to the adopted timetable (LDS8) is set out below. This will be kept up to date as the examination progresses. 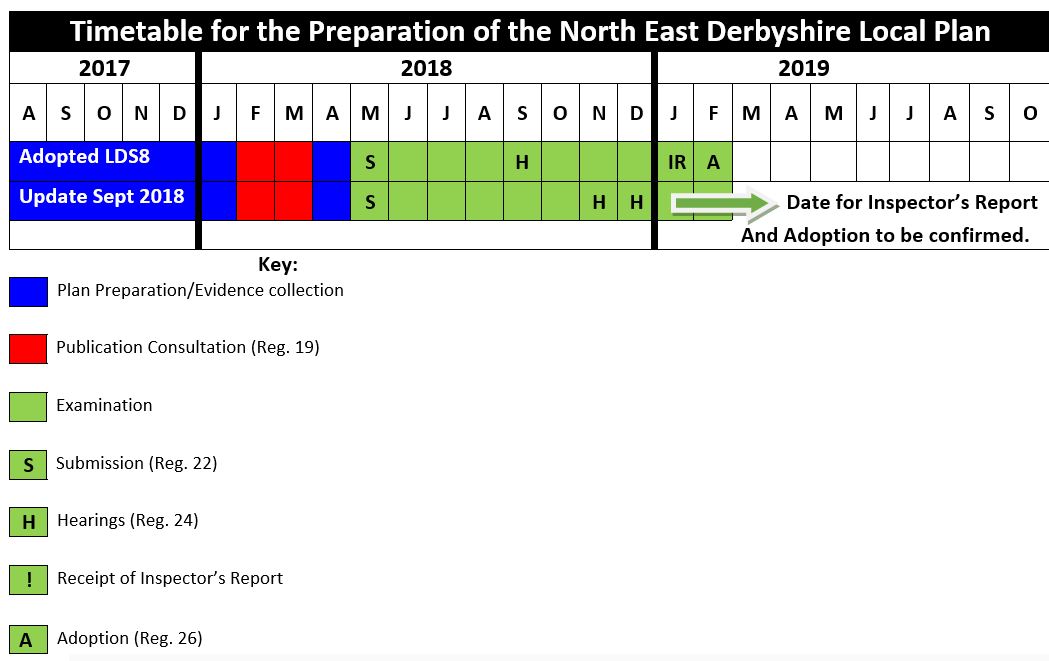 The adopted Local Development Scheme timetable indicates that the Council would make a decision on whether there is a business case for preparing a CIL in February 2018.

On 14 February 2018 Cabinet considered a report (Agenda Item 4) which set out the case for implementing CIL. This was based upon the findings of a ‘Whole Plan Viability Study commissioned by the Council and undertaken by an expert viability consultancy which assessed the overall viability of the Local Plan in line with the NPPF, the NPPG and other relevant guidance on viability in plan-making.

The study found that the combination of relatively low values and current high build costs creates a challenging picture for development viability in North East Derbyshire and did not consider the adoption of a CIL to be appropriate at this point in time, but rather the council should continue with the use of the s106 process to help fund necessary infrastructure.

Members resolved to note the findings of the Whole Plan Viability Study and agreed not to implement a Community Infrastructure Levy for the District alongside the emerging Local Plan.