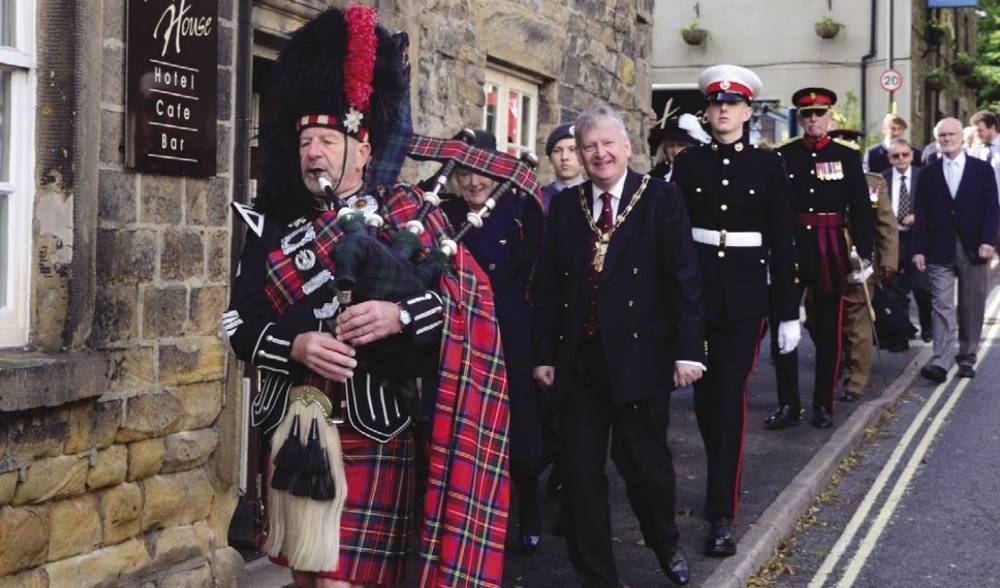 The event was open to the whole community and was attended by Armed Forces personnel, support organisations, veterans and cadets. It also included entertainment, children’s activities, activities, craft stalls, displays and food was available. There were also stalls promoting local businesses and community groups.

A church service was also held at Dronfield Parish Church, which was attended by Vice Lord-Lieutenant of Derbyshire Colonel John Wilson OBE DL, the High Sheriff of Derbyshire Mrs Louise Potter, veterans and other dignitaries. Those attending the service were led by a Highland Piper from the sports centre to the church. Chairman of the Council at the time and Armed Forces Champion of the Council, Cllr Martin Thacker MBE, said “The event was a great way to pay tribute to the Armed Forces Community in our District and commemorate the Council’s ongoing commitment to the Armed Forces Covenant. It was also a way for members of the Armed Forces, veterans and their families and the community to come together and enjoy the stalls and activities on offer.”

A commemorative stone was laid at Killamarsh war memorial on 1st October 2017 to commemorate the 100th anniversary of Killamarsh-born Fred Greaves’ award of the Victoria Cross in World War One for ‘most conspicuous bravery, initiative and leadership.’

On 4th October 1917 whilst serving in the 9th Battalion, The Sherwood Foresters (The Nottinghamshire and Derbyshire Regiment) during the Battle of Broodseinde, Acting Corporal Greaves captured an enemy machine gun position and later established defensive positions to protect comrades under attack from advancing forces.

The event was organised by partners including Killamarsh Parish Council, Killamarsh Heritage Society, local traders, NEDDC and the local branch of the Royal British Legion.

Grassmoor resident Jack Parrott has been awarded France’s highest honour, the Legion d’Honneur at a special ceremony at our Mill Lane offices. It was a double celebration for Jack (97), who also celebrated his 67th wedding anniversary the same day.

The French Government awarded the Legion d’Honneur medal, the highest award given by the French Republic, to those who were either at the Normandy invasion on D-Day or were there within the month afterwards.

The medal was presented to Jack by the French Consul in Nottingham, Jean Claude Lafontaine, in front of friends, family, dignitaries and members of the Council.

‘There But Not There’ Tommies

To commemorate the centenary of the end of WW1, NEDDC purchased 4 life sized Tommy silhouettes from ‘There But Not There’, a project led by Remembered charity, to display at the Council offices, leisure facilities and relevant events in remembrance of all the men and women from North East Derbyshire who have fallen whilst serving their country.